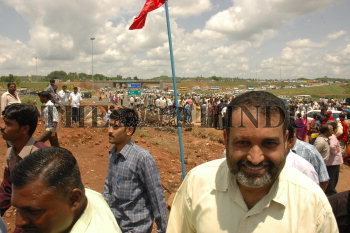 Caption : Mr. Mohan Das Pai, Director, HR, Education and Research, Infosys, walks between the crowd during the inauguration of the first phase of Bangalore-Mysore Infrastructure Corridor (BMIC) project's 9.2-km peripheral road connecting Kengeri (Mysore road) and Thalagattapura (Kanakapura road), at Somapura Junction on the outskirts of South-West Bangalore, on June 16, 2006, taken up by Nandi Infrastructure Corridor Enterprise Limited (NICE). The company inaugurated the peripheral road in dispute. The state government on June 15, 2006 took the first preventive action against NICE by serving a notice, but in vein. Around 20,000 People gathered for the inauguration. Photo: K. Murali Kumar