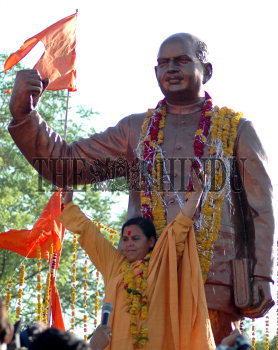 Caption : Former Chief Minister and Bhartiya Janshakti Party Chief, Uma Bharti, raising hands after handing over her party flag to the statue of Pt. Shyama Prasad Mukherji in Bhopal on June 15, 2006 during her party's 'Bharat Suraksha Yatra' entered in the state capital. Photo: A. M. Faruqui