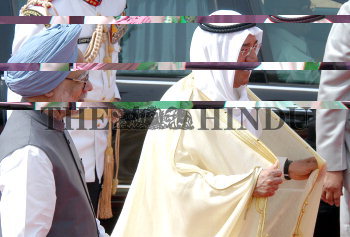 Caption : Kuwait Emir Sheikh Sabah Al-Ahmad Al-Jaber Al-Sabah with Prime Minister, Dr. Manmohan Singh waiting on him, at a ceremonial reception given to him at Rashtrapati Bhavan, in New Delhi on June 15, 2006. Photo: Ramesh Sharma