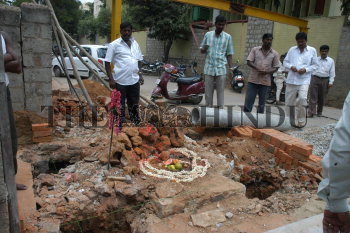 TENTION AT GANGANAGAR FOLLOWING THE DEMOLISHING OF

Caption : Tension at Ganganagar following the demolision of an ant hill last night (believed to be worshipped by the locals for decades) which was on the pavement of CBI road, Ganganagar in Bangalore on June 15, 2006. They were seen reconstructing a structure on the same place. Photo: K. Gopinathan