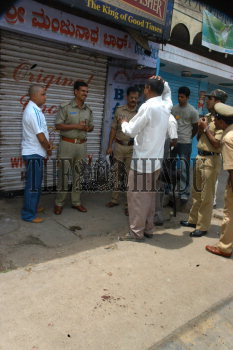 VENKATESH FINANCIER STABBED BEFORE A BAR AT GIRINA

Caption : Police inspecting the spot and questioning the people where the financier Venkatesh was stabbed before a bar and the money he was carrying was snatched in broad day light at Girinagar Police limits in Bangalore on June 14, 2006. Photo: K. Gopinathan