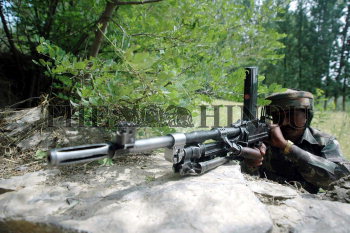 Caption : An army soldier taking position during a gunbattle at Pampore some 30kms from Srinagar on June 13, 2006. Two militants were killed and two army soldiers were injured in the gunbattle. Photo: Nissar Ahmad