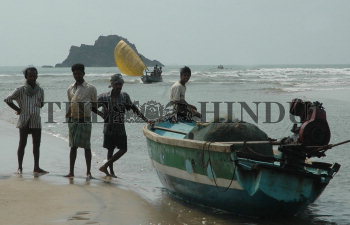 Caption : Pittakonda -- popular locale for Tamil and Telugu film producers -- may become thing of the past with a new port coming up at Gangavaram near Visakhapatnam fears expressed by NGOs that it will be flattened. This was featured in several films including `Ek Duje Ke Liye' duet directed by K. Balachander Photo: C.V. Subrahmanyam 13-06-2006