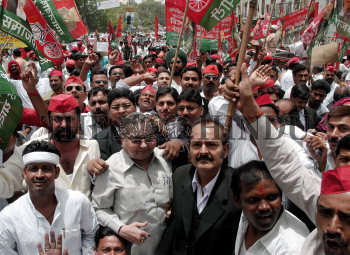 Caption : A demonstration by Samajwadi Party workers led by Rajya Sabha member and former Advocate General, Virendra Bhatia (in safari suit) during their Statewide bandh call, in Lucknow on June 13, 2006 in protest against UPA Government's recent hike in prices of petrol and diesel. Photo: Subir Roy