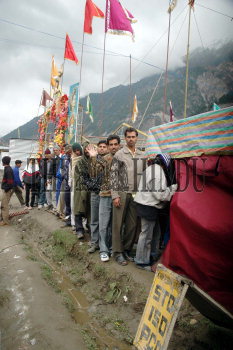 Caption : Pilgrims waiting in line for their turn in front of an STD booth at Baltal,120 kilometres northeast of Srinagar on June 13, 2006. Thousands of Hindu devotees are expected to make the 16-kilometre trek from Baltal, in the two-month long season, when the Amarnath shrine, an icy stalagmite in a mountain cave, is open to visitors. Hindus worship the stalagmite as an incarnation of the God Shiva. Photo: Nissar Ahmad