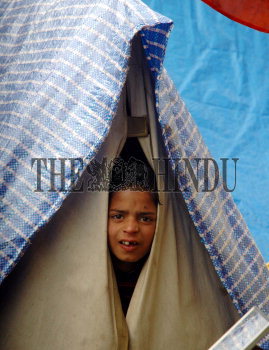 Caption : An Hindu pilgrim peeping through a tent as she waits for the weather to improve at a base camp in Baltal,120 kilometres northeast of Srinagar on June 13, 2006. Thousands of Hindu devotees are expected to make the 16-kilometre trek from Baltal, in the two-month long season, when the Amarnath shrine, an icy stalagmite in a mountain cave, is open to visitors. Hindus worship the stalagmite as an incarnation of the God Shiva. Photo: Nissar Ahmad