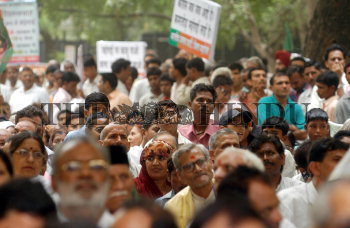 Caption : BJP workers listen to the speech by former Prime Minister, Atal Bihari Vajpayee (not in pic) at the demonstration against price hike on petrol and diesel at Jantar Mantar in New Delhi on June 12, 2006. Photo: S. Subramanium