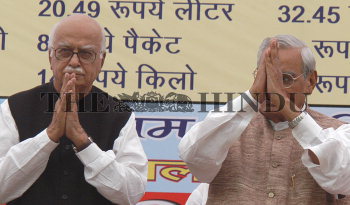 Caption : Former Prime Minister, Mr. A. B. Vajpayee with Mr. L. K. Advani, at a dharna called by the Bharatiya Janata Party against the hike in prices of petrol and diesel, in New Delhi on June 12, 2006. Photo: Ramesh Sharma