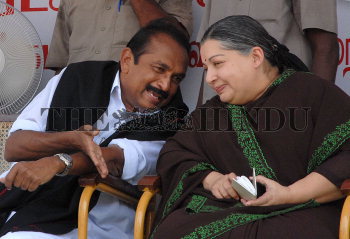 Caption : MDMK general secretary Vaiko having a word with AIADMK general secretary and former Tamil Nadu Chief Minister J. Jayalalithaa during a protest demonstration against the hike in petrol and diesel prices, near Memorial Hall, in Chennai, on June 12, 2006. Photo: M. Vedhan