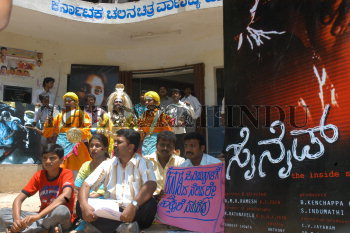 Caption : Akshaya Creations' film makers and artistes and others are staging a dharna for not getting theatre to release their film 'Cynide', in front of Karnataka Film Chamber, in Bangalore on June 12, 2006. Photo: K. Gopinathan