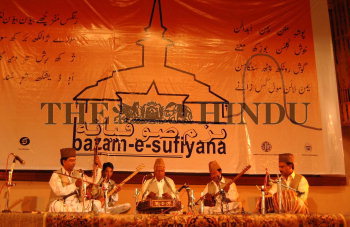 Caption : Ustad Gh. Mohammad Saaznawaz along with his team performing a programme during the inauguration of five-day long Indo-Pak Sufi music festival at SKICC in Srinagar on June 11, 2006. Photo: Nissar Ahmad