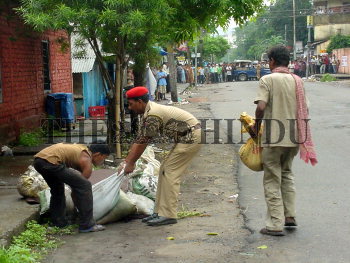 Caption : Bomb squad personnel try to dispose off a bomb planted by suspected United Liberation Front of Asom (ULFA) near the office of Superintendent of Police, Kamrup in the heart of Guwahati city on June 10, 2006. Fear and panic gripped Assam after separatists triggered five powerful explosions overnight blowing up oil and gas pipelines and wounding at least six people.Two pipelines transporting natural gas and many crude oil pipelines were blown up in landmine explosions, while six people were seriously injured when militants lobbed a grenade at a private residence.The serial explosions on June 09, 2006 night came hours after a powerful blast at a crowded vegetable market killed five people and wounded six more in Assam''s main city of Guwahati.There is tremendous fear with people literally panicking after some 10 explosions have taken place since June 08, 2006 night. Photo: Ritu Raj Konwar