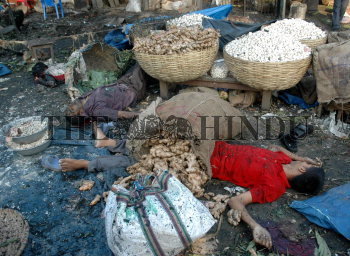 Caption : Dead bodies lying at the bomb blast site in the busy Machkhowa area in the heart of Guwahati city on June 09, 2006. Five people died on the spot and several others seriously injured when the suspected United Liberation Front of Asom (ULFA) militants triggered a powerful IED. ULFA has warned of carrying out serial blasts around the State to mark their protest in delaying the peace talk by the Central Government. Photo: Ritu Raj Konwar