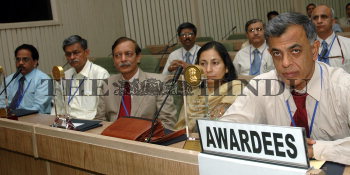 Caption : A.K. Baweja (ext right), Chairman of HAL, seen with other winners of the Raksha Mantri Awards for Excellence in the field of production of equipment for defence services, at a function in New Delhi on June 09, 2006. The Union Defence Minister Pranab Mukherjee (not in pic) presented the awards to them. Photo: Sandeep Saxena