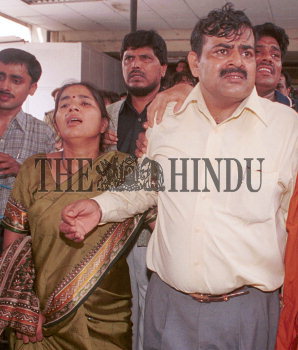 Caption : Anguished relatives of Phoolan Devi coming out of a ward in Ram Manohar Lohia Hospital in New Delhi after the 'Bandit Queen' was pronounced "brought dead" by hospital authorities on July 25, 2001. PHOTO: RAMESH SHARMA