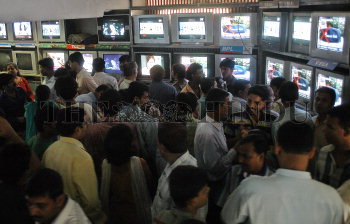 Caption : The colour TV retailers in Kolkata do not have much time to relax as the demand of television has reached its peak due to world cup football season. The huge crowd thronged to buy new televisions at a retail outlet in Kolkata on June 8, 2006. Photo: A. Roy Chowdhury