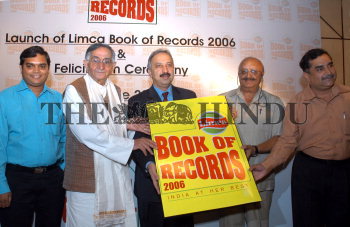 Caption : Atul Singh, President and CEO, Coca-Cola India (centre) with "People of the Year" and "Limca Book of Records 2006" awardees (from left) Nishant Kasibhatla, J.N. Kaul, Vijaypat Singhania and Cdr. Uday K. Sondhi, at a function in New Delhi on June 08, 2006. The latest edition of new 2006 Limca Book of Records was also released on the occasion. Photo: Shanker Chakravarty