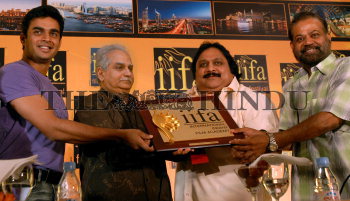 Caption : From left: Film actor Madhavan with Bollywood filmmaker Ramesh Sippy presenting a plaque to Ram Kumar and P. Vasu, the producer and director of `Chandramukhi' to comemmorate the film, at a press conference in Chennai on June 08, 2006. The movie will open the festival of the International Indian film Academy (IIFA) which will be held in Dubai from 15 to 17 of June 2006. Photo: Shaju John