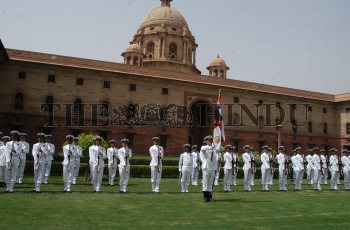 Caption : Indian Navy soldiers stand in formation to give a ceremonial guard of honour to the visiting New Zealand Naval Chief, Rear Admiral David Ian Ledson (not in picture), at the South Block in New Delhi on June 8, 2006. Photo: S. Subramanium