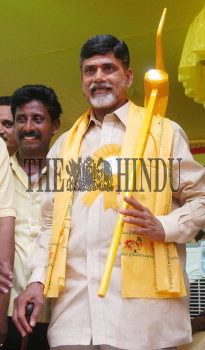 Caption : The Telugu Desam Party (TDP) president, N. Chandrababu Naidu, with a 'nagali' (plough) presented to him at the Party's District-level review meeting in Visakhapatnam on June 7, 2006. He also launched the pre-poll campaign of his Party for the local bodies election. Photo: C.V. Subrahmanyam