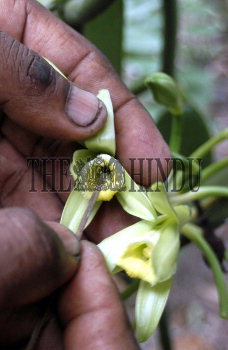 Caption : Vanilla pollination is in prograss in a plantation, near Kochi. India, with a huge domestic market for natural vanillin, has to compete with synthetic vanilla whose use is an estimated 500 tonnes a year. Vanilla production in India is expected to be above 200 tonnes against estimated 180 tonnes last year and the export last fiscal stands at 75 tonnes, states reports by Spices Board. Photo: K.K. Mustafah 8/06/06