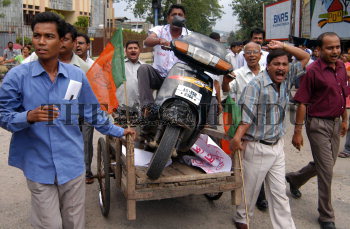 Caption : Bharatiya Janata Party (BJP) activists carrying a scooter on a push-cart during a protest staged in Guwahati on June 7, 2006, against the fuel price hike announced by the Central Government. Photo: Ritu Raj Konwar