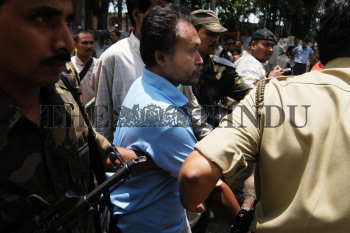 Caption : Plaban Phukan alias Mrinal Hazarika (in blue) a hard-core militant of the banned militant organisation, United Liberation Front of Assam (ULFA) being brought in tight security to Guwahati on June 07, 2006. Front-ranking ULFA leader Plaban Phukan and three others of the outlawed militant group were arrested in Siliguri, West Bengal state last month, when they tried to enter Nepal. Police recovered a pistol, three cartridges, two mobile phones, a satellite phone, Indian rupees 20,370 in cash and a small amount of Nepali currency from them. Plaban Phukan, the commander of ULFAâs 28th Battalion was the main man behind many blasts and major operations in Upper Assam. This will be a major blow for the ULFA, when the effort of peace talk between ULFA and Indian Home Ministry is in progress. Photo: Ritu Raj Konwar