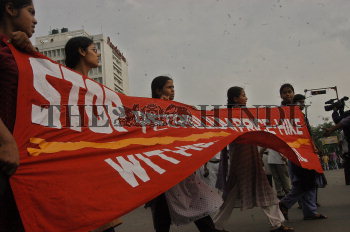 Caption : Young supporters of the Socialist Unity Center of India (SUCI), a left party, carrying the protest message on the price hike of petrol, diesel and other petroleum products in Kolkata on June 6, 2006. The party organsied a rally to protest against the hike and burn effigy of the Union Minister of Petroleum. Photo: A. Roy Chowdhury