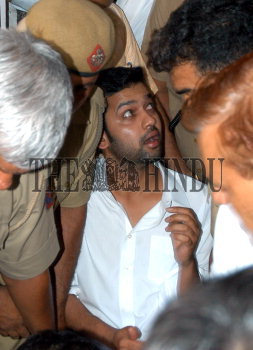 Caption : Rahul Mahajan, son of late BJP leader, Pramod Mahajan, is surrounded by policemen as he arrives on a wheelchair at the Patiala House Court in New Delhi on June 6, 2006. Mahajan was earlier discharged from the Apollo Hospital and brought to a police station where a case has been registered against him under the Narcotic Drugs and Psychotropic Substances Act, after being arrested on June 05, 2006. Photo: Shanker Chakravarty