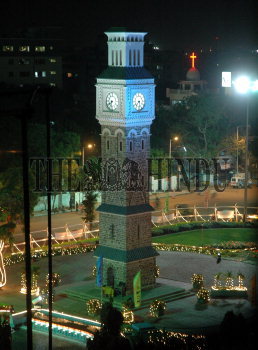 Caption : The historic Clock Tower stands tall and illuminated in Secunderabad. Built by the sixth Nizam Mehboob Ali Khan in 1860, the tower served as monument of the progress of the British Cantonment and now, after nearly 200 years, remains as a major city-landmark and is also listed for its architectural and historical value. Photo: P. V. Sivakumar 06/06/2006