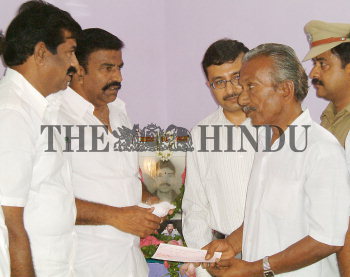 Caption : Tamil Nadu Transport Minister K.N. Nehru and Forest Minister N. Selvaraj having a word with D. Sundaramurthy, the father of army jawan D.S.M. Raja, who was killed in an action in Jammu and Kashmir, after handing over the solatium to him at his residence near Tiruchi on June 05, 2006. The Collector Ashish Vachhani and the Superintendent of Police, Ashok Kumar Das also present. Photo: R.M. Rajarathinam