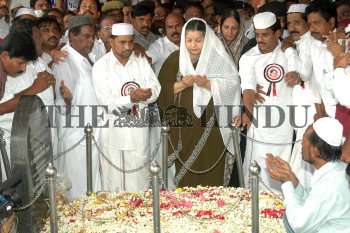 Caption : The AIADMK supremo and the Leader of the Opposition in the Tamil Nadu Assembly, J. Jayalalithaa, and Party leaders paying homage to Quaid-E-Milleth, at his memorial at Big Mosque in Triplicane, Chennai on the occasion of the late leader's 111th birth anniversary on June 5, 2006. Mohammed Ismail, popularly known as Quaid-E-Milleth, is the founding father of Indian Union Muslim League. Photo: S.R. Raghunathan