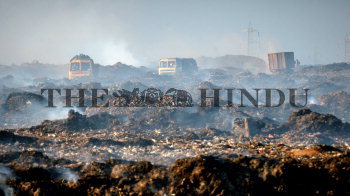 Caption : Smoke from the burning of garbage dumped in Perungudi, an important wetland in the city suburb. The city generates several tonnes of garbage a day causing harm to the environment. World Environment Day being celebrated every year on June 05, 2006. Photo: Shaju John June 04, 2006