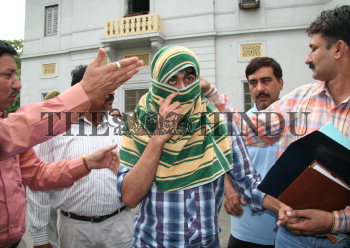 Caption : Sahil Zaroo, son of a Srinagar businessman, fourth person named in the Rahul Mahajan case, surrendered before the Jammu and Kashmir police in Srinagar on June 03, 2006, being produced at the Patiala Courts in New Delhi on June 04, 2006. Photo: R.V. Moorthy