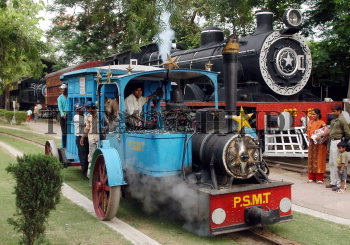 Caption : The famous Patiala State Monorail Trainway (PSMT) which originally used to be pulled by 'Mules' in 1907 during its run for children on the eve of the 'World Environment Day' in New Delhi, on June 02, 2006. This steam engine version was one of the four procurred from Germany. Photo: V.V.Krishnan