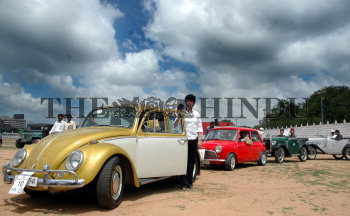 Caption : Lined up: Vintage cars at the rally at Parade Grounds in Secunderabad on June 04, 2006. The rally was organised in connection with the city's bicentenary celebrations and it was flagged off by former Indian Test cricketer Venkatapathy Raju (not in pix). The Andhra Pradesh Government has organised a number of cultural events to mark the anniversary. Photo: Mohammed Yousuf