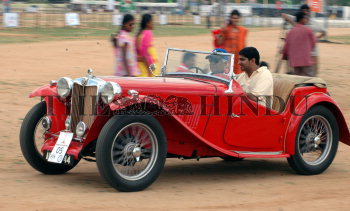 Caption : Time-less machines zoom past during the vintage car rally after it was flagged off by former Indian Test cricketer S.L.Venkatapathi Raju, (not in the picture) at Parade Grounds, in Hyderabad, on June 04, 2006. The rally was organised in connection with Bicentenary celebrations of Secunderabad. The week long celebrations begun in the State captial as the Andhra Pradesh Government has lined up a number of cultural events to mark the anniversary celebrations, which is part of twin cities of Hyderabad and Secunderabad. Photo: Mohammed Yousuf