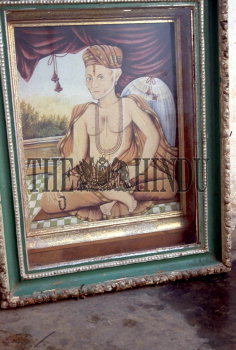 Caption : A painting of Saint Thyagaraja. Saint Thyagaraja was born on 4th May 1767 at Tiruvaiyaru in Tanjore district of the southern Indian State of Tamil Nadu. His father Rama Brahmam wanted his son to learn everything to the boy's choice.Thyagraja was a prodigy who was gifted with melodious voice. He learnt music under Sonti Venkataramaiah, a great scholar of those days and soon gained a profound knowledge in Telugu, Sanskrit (Two renowned Indian languages), Jyotisha(Astrology), Ganita (Mathematics) and Mantra Sastras. He started composing songs in his teens itself and continued to dedicate his whole life in writing innumerable songs in praise of Lord Rama (Ishta Deivam) as well as few other deities like Lord Venkateswara and Lord Vinayaka. His kirthanas are direct, simple and inspiring, full of wisdom and entire surrender to the Almighty. Sri Thyagaraja's festival takes place at Tiruvayaru every year where he composed many of his compositions attended by all Carnatic musicians from south and north of India and lovers, patrons of music. January 1986