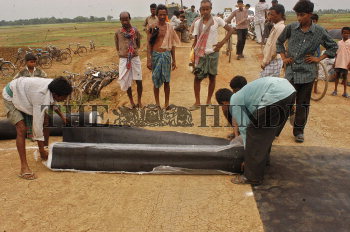 Caption : The daily wage labourers are seen busy laying jute geo-textile material on 4.8 km. long Natuk-Dungal road in Paschim Medinipur district of West Bengal on Wednesday, May 31, 2006. Countries first pilot project of laying rural roads on jute geo-textile material under Pradhan Mantri Gram Sadak Yojana (PMGSY) is kicked off from the remote corner of the state by Jute Manufactures and Development Council (JMDC) in association with Central Road Research Institute and West Bengal Rural Development Authority. Along with West Bengal, a total 10 roads of 47.84 km. spread over in four states viz. Assam, Chhattisgarh, Madhya Pradesh, Orissa, which will be laid in the pilot project with an estimated cost of Rs.17.83 crores. The pilot project will be funded by the Union Ministry of Rural Development. The flood prone area of the district has been chosen to test the durability of the environment friendly jute geo-textile material. Despite the hassles of mass production and standardisation of the material, GMDC is trying hard to push it further to meet the global demand. Photo: A. Roy Chowdhury