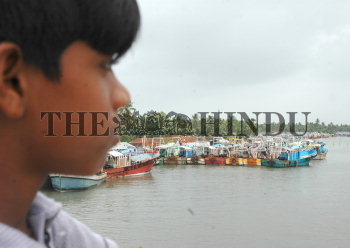 Caption : A boy looks at fishing trawlers at Kochi, Kerala. State Government has decided to conduct an impact assessment study on monsoon trawl ban. A decision on trawl ban during this monsoon is expected to be announced next week. Photo: H. Vibhu (30/5/06)