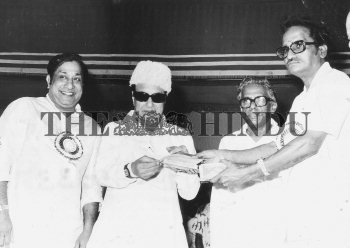 Caption : On behalf of Madras District, a `Star Nite' was organised for collection of `Chief Minister's Relief Fund' at Madras, on 19th April, 1984. A cheque for Rs. 36 lakhs collected through this event was presented by the Madras District Collector, K. Sundaramoorthy to the Tamil Nadu Chief Minister, M. G. Ramachandran. The HR and CE Minister, Rama. Veerappan and noted film star, Sivaji Ganesan, MP are also seen in the picture.