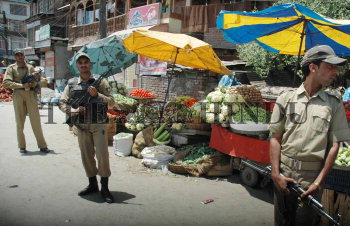 Caption : Police and CRPF soldiers standing guard after a grenade attack in Srinagar on May 30, 2006. A policeman was killed and four, including two civilians wounded when suspected militants threw a grenade at a police vehicle near the crowded market place in the heart of Srinagar city. Photo: Nissar Ahmad