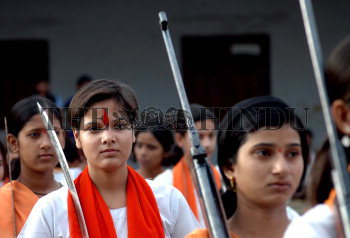 Caption : Members of the Durga VAHINI, group of Vishwa Hindu Parishad, holding sword and Rifles at the 'Path Sanchalan' foot march in Bhopal on May 29, 2006 during the week long 'Shourya Prashikshan Varg' training camp. Photo: A. M. Faruqui