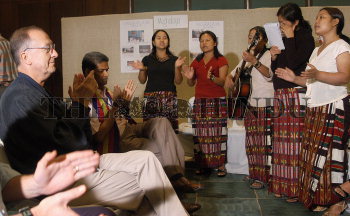 Caption : Mr. Antonio Maria Costa, Executive Director to the United Nation Office for Drugs and Crime listenig to songs sung by participants at a review meeting with NGOS from the eight North-Eastern States in Kolkata on May 25, 2006. The Ministry of Social Justice and Empowerment in partnership with NGOS and the UN has been carrying on with community-based interventions in the North-East. This was a follow-up after the release of a study on the drug use in the Northeastern States of India. Mr. Costa conveyed that the UN is launching a campaign against the drug abuse and trafficking in India on June 26, 2006. Nicknamed 'Decide', the campaign will reach-out schools through the NCERT and the CBSC. Photo: A. Roy Chowdhury