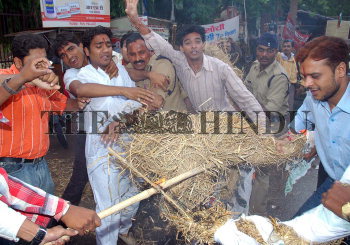 Caption : Policemen snatching an effigy of Chhattisgarh Chief Minister Dr. Raman Singh from the NSUI activists, who were protesting over the alleged support to the Germ-plasm theft in the Indira Gandhi Agricultural University, in Raipur, on May 23, 2006. Photo: Akhilesh Kumar