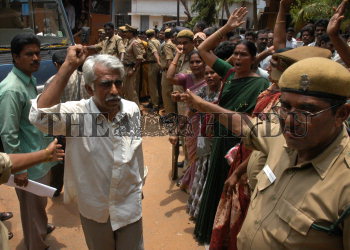 Caption : CPI (M) district secretary Ch. Narsinga Rao raising slogans along with party activists when he and 52 other accused in the Gangavaram fishermen agitation were produced in the district court in Visakhapatnam on May 23, 2006. Later they were shifted to the Central Jail. Photo: K.R. Deepak