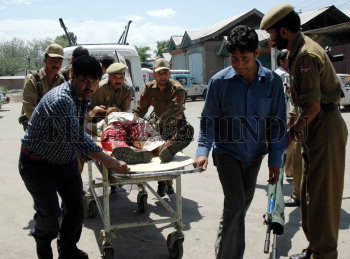 Caption : Police personnel carrying the wounded Inspector General of Police (IGP) K. Rajender at SHMS Hospital in Srinagar, when he was injured in a militant attack during a political party rally in Srinagar on May 21, 2006. Suspected militants hurled grenades and fired bullets into the crowd at a ruling Congress Party rally, killing two suspected militants and one policeman and wounding at least 13 people. Photo: Nissar Ahmad