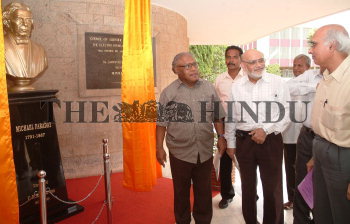 Caption : Dr.C.N.R. Rao (left), Chairman of the Scientific Advisory Council to the Prime Minister, unveiling the bust of Michael Faraday, the British scientist who invented the electric transformer over a century ago, at the Central Electrochemical Research Institute (CECRI) in Karaikudi on May 19, 2006. Prof. N. Kumar (middle) from Raman Research Institute, Bangalore and Prof. A.K. Shukla (right), Director, CECRI, are also seen. Photo: K. Ganesan