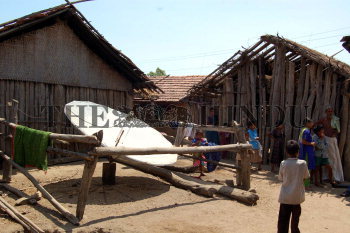 DISH AND THE DEVELOPMENT

Caption : Window to the world: Months after a road was laid connecting Gangapur, a remote tribal village in Adilabad district of Andhra Pradesh, the dish made its presence felt. The tribals were hooked to the TV till the Telugu CHANNELS became pay CHANNELS. Photo: R. Raju 19-5-2006