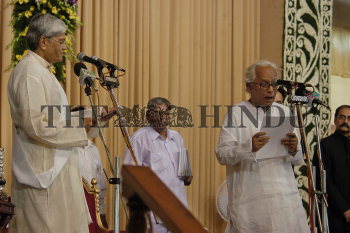 Caption : Mr. Buddhadev Bhattacharjee is being sworn in as Chief Minister of West Bengal by the Governor, Mr. Gopal Krishna Gandhi at Raj Bhavan in Kolkata on May 18, 2006. With this, the Left Parties formed the Government for the 7th times in the state after the landslide victory in the Assembly Election 2006. Photo: A. Roy Chowdhury